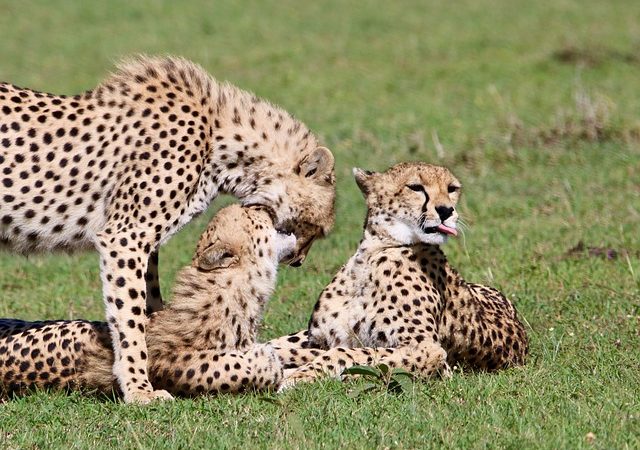 Cheetah in masai  mara : Cheetahs scientifically called Acinonyx jubatus are almost looking like Leopards though they are not as muscular as them with the tearing line running from the eyes to the mouth makes them differ from each other. Cheetahs are built for sheer speed making them the fastest land mammal on the planet earth with an estimated speed of 110 kilometers per hour.

Cheetahs give birth to Cubs between 1 to 6 after the gestation period of 3 months, its very rare for all the cubs to grow to maturity levels due to many factors that succumb them like poor health, predators and many hence affecting negatively to the increase of the population despite the fact that they produce more cubs.

Masai Mara national reserve is one the destinations where one can easily spot Cheetahs as their population is high, they can be easily spotted when they are high on termites mould, small raised rocks, car bonnets as they position themselves high for easy sighting of the prey. There speed gives them an added advantage to ambush and catch the prey though its also a disadvantage to them in that after killing they have to rest for more than 20 minutes before starting to feed on the the prey giving advantages to hyenas, jackals and other small predators who can easily scare and chase them away as they are very fearful.

The population of the cheetahs keep reducing in Africa with the current number being around 7000 cheetahs only not even a half of the populations 30 years back with so many factors contributing to the population drop rapidly like illegal trade on animals, human conflicts with wildlife for land and many more factors.

Cheetahs especially the males leave in groups so as to ease their chances of hunting and also have good territory protection; Cheetahs demarcate their territories with urine, faeces and sometimes claw-raking. Thanks to the Masai Mara Meru Cheetah project which is trying to protect, sensitize the locals on the ways of leaving together with the cheetahs at peace and advocating for sustainable tourism by making tourists themselves to responsible in the conservation of the wildlife through following well the reserve regulations.

Our customer support team is here to answer your questions. Ask us anything!
👋 Hello, I am here to help you
Chat with Us