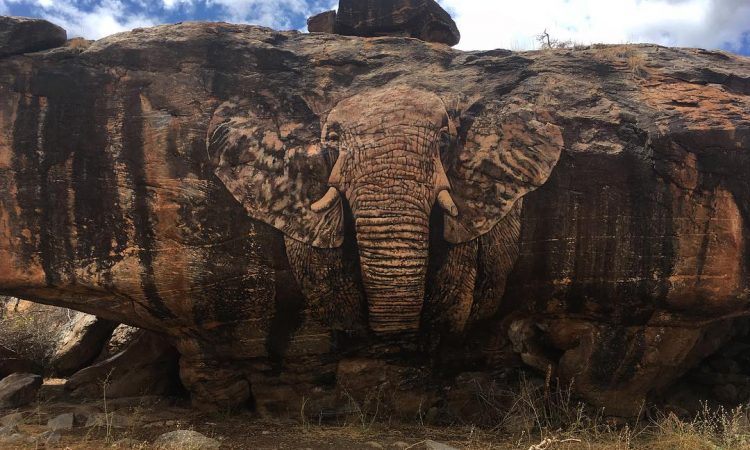 Rock Art in Kenya: Kenya is a rich history safari destination with a rich history of rock art, rock art in Kenya widely distributed throughout various regions of the country. Rock art in Kenya are associated with the ancestors of modern regional cultural groups and these sites retain local religious importance. Rock art sites in Kenya are majorly occur in western Kenya near Lake Victoria, northern Kenya along the rift valley region and southern Turkana, western Kenya in suba district and Mfangano Island in Lake Victoria.

Rock art in Kenya as well as Africa is dated thousands ago, these art pieces express ideas, beliefs and imagination of the past and present human communities/societies, their heritage, technical and artistic ability.  Rock art sites in Kenya include

These rock shelters and over hangs/ rock paintings were used by the Ndorobo hunter-gatherers and Masai pastoralists in past and they are believed to be over 100 years old, these rock painting include abstract motifs portraying painted shields and dwellings daubed on to the rock in ochre. These abstract motifs are made in red white, yellow and animal fat.

Some of these rock paintings are believed to have been painted by the Maasai pastoralists during warrior initiation ceremonies locally known as “Ol Pul” in Maa language, rock art site in Nairobi national park are only visited on a arranged tour with a park’s warden at the park’s office  and the tour is done   accompany of an armed ranger.

Mfangano Island is a large mountainous island found in Lake Victoria and lies in the eastern part of the lake at the mouth of the Winam Gulf, Mfangano Island also lies west of Rusinga Island, south of Kisumu and Homa Bay. Mfangano Island covers an area of 65 square kilometers rising at the altitude of 1,694 meters at Mount Kwitutu, this island is inhabited by Olusuba or Suba language speaking people.

Rock art in Mfangano Island are geometric paintings believed to have been made by Twa hunter-gatherers and they were made about 2000 – 4000 years ago, on Mfangano island there are two main rock art sites that are Mawanga and Kwitone. Mawanga rock site is found in Mawanga cave situated in a short walk from Mawanga village, in Mawanga village there is a boat jetty and it looks out towards the lake and Nzenze Island which is a sacred site to one of the suba clans. Kwitone rock art is found in Kwitone shelter situated near the top of a mountain above a sacred forest and is reached on 40 minutes hike through the forests.

Mfangano Island rock art offers an opportunity to learn more about the island’s history and its people, the tour of visiting the rock art is done in company of a tour guide hired from Abasuba Community Peace Museum.

Rock Art of Namoratunga are found in Turkana County the last frontier of North West Kenya, Lake Turkana is a rich tourist destination consisting of Lake Turkana the largest desert lake in Africa situated in the eastern region of the county. Turkana County is rich with rock art heritage including rock engravings believed to be over 2000 years.

Rock engravings feature geometric designs and shapes of animals such as elephants and giraffes, these rock engravings referred to as rock art of Namoratunga are believed to have been made by the Twa hunter-gatherers and this is due to similar images found in Twa inhabited areas such as East Uganda and areas around Lake Victoria basin.

Main rock art sites in Turkana County include Namoratunga and Kangi’itit situated near Lokori town, Lokori town lies south of Turkana basin and is easily accessed by road and air means of transport from Eldoret.

Kakapel National museum also referred to as Kakapel rock art museum sits on the slopes of Chelelemuk hills and situated on the foothills of Mountain Elgon near Kenya-Uganda border, Kakapel national museum is one of the most recognized rock art site in Kenya showcasing a unity in variety of styles and artistic traditions over a long period of time.

Kakapel national museum and its rock art is one of the most elaborated Iron Age sequences so far documented in Kenya and it is composed of 3 discernible time scales,

Rock art at Lewa Downs consists of geometric and abstract rock paintings also known as rock gongs, these Gongs are recognized for the large numbers of cupules/ carved cup shaped depressions. These gongs produce different tones just like a musical instrument when struck by hammer gongs, rock painting at Lewa downs consists of white concentric circles, grids and line along with ochre paintings. The rock paintings are believed to have been made by Twa hunter-gatherer between 1000 – 3000 years ago, this site is said to have been used for rain making rituals as it resembles similar sites found in Uganda around Lake Victoria.

Rock Gongs of Lewa Downs are accessed by scheduled flights from Wilson Airport in Nairobi  and by road on a drive of 4 and half hours from Nairobi, touring the art rocks at Lewa Downs is done prior to booking with Sophie and Calum Macfarlane the specialists in the ancient archeology of Lewa. (Rock Art in Kenya)